Virtual Reality (VR) glasses have entered the market and are available today in different versions, ranging from low to high-priced models. 3D sound is a requirement for VR illusions and a full immersion into virtual worlds. Since 2014, Fraunhofer Cingo surround audio rendering has been Samsung’s technology of choice for delivering immersive sound on its GearVR headset. At IBC 2015, Fraunhofer and castLabs (http://castlabs.com/news/castlabs-builds-samsung-gear-vr-app-featuring-fraunhofer-cingo/) demonstrate a new VR streaming app that delivers MPEG-H encoded 3D audio content including audio objects to the GearVR. Visitors can experience the immersive sound for 360 videos and a virtual cinema environment at Fraunhofer’s booth (hall 8, booth B80).

Fascinating Sound from all Directions

MPEG-H and Cingo provide the possibility to place an arbitrary number of sound objects anywhere in a virtual space around the listener. As a result, the listener can perceive sound elements in the front, behind, from above or below. “Our immersive audio demo app, created together with castLabs, brings 3D audio to the next level. The immersion is strengthened through virtual height speakers and sound objects that move around the listener, e. g. whispering voices close to the listener’s ear or sound objects flying above their heads. As a result, the listener truly feels immersed in the virtual 3D scene with a stunning level of reality that creates an experience of ‘being there’”, explains Julien Robilliard, Cingo product manager at Fraunhofer IIS. 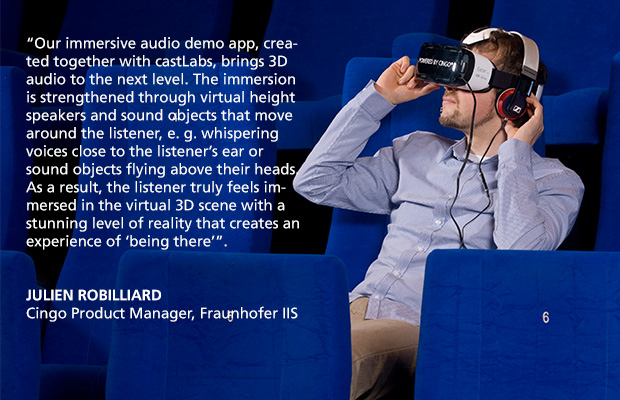 The MPEG-H audio standard is the ideal companion for Cingo 3D audio rendering as it can deliver immersive 3D sound for virtual environments to mobile devices at bitrates used in the past to deliver 2D surround sound. As a core contributor, Fraunhofer IIS played a major role in the co-development of this new MPEG-H audio standard. Movies, games or other virtual environments can be played using Cingo via headphones on VR devices such as the Samsung GearVR. The combination with adaptive streaming standards such as MPEG-DASH ensures the best possible audio playback even under changing network conditions.

Immersive Sound in the Real World

Fraunhofer Cingo and MPEG-H also deliver an unrivalled sound experience to “non-VR” mobile devices such as tablets and smartphones. At home or on the go, sound enthusiasts can not only benefit from fascinating immersive sound over headphones, but also clear and natural stereo sound when using built-in loudspeakers. Thanks to the integrated loudness optimization, in situations involving noisy environments and/or devices where loudspeakers simply cannot output sufficient volume, the advanced loudness optimization features can be tremendously beneficial.

Want to learn more about MPEG-H and Fraunhofer Cingo? Visit our website or meet us at our booth at IBC in Amsterdam (hall 8, booth B80) from September 11-15, 2015 to experience a live demo of our 3D audio solution for VR applications. castLabs will also be hosting the VR demo (booth K02 in hall 14). We look forward to your visit! 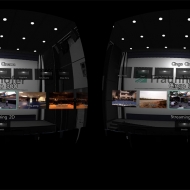 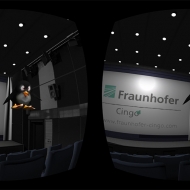