The vision of the EU project Vconect is to adopt high quality enriched video as a medium for mass communication within online communities. To highlight the fact that this vision is already an achievable reality, Vconect is collaborating with the Cornwall, UK-based Miracle Theatre and just recently supported the representation of Shakespeare’s “The Tempest – live and digital”. For the play, the actors and audiences were located at two different theaters connected via Vconect technology.

On September 8th and 9th 2014, the Miracle Theatre presented an exceptional version of Shakespeare’s The Tempest. Exceptional not only because the original script was “respectfully shaken and stirred”, but also because the cast members were split between two remote venues in Falmouth, Cornwall: namely Discovery Quay’s Maritime Museum and the nearby Doghouse. Audiences at both sites, as well as those watching via Internet at home, were witnesses to a show which is believed to be the first of its kind anywhere in the world.

In partnership with Vconect and the Superfast Cornwall initiative, which is encouraging the development of superfast broadband in the Cornwall region, Miracle decided to connect the venues with the help of a multi-camera telepresence system. Unmanned cameras captured developments on one stage, with the resulting pictures then being streamed to TV screens at the other venue in real-time.

Across both venues, the The Tempest cast won rave reviews from theatregoers wowed by the innovative new technology. “What an evening! Watching the worlds of lovies and tech heads combine to create something really special and super clever was pretty amazing. I can’t stop thinking about future possibilities… what will you [Miracle] do next?” asked Sarah F. from St. Agnes. Simon Willis from Falmouth stated: “Very, very clever… truly unique… I’m really quite thrilled to have been part of it!“ The interest in a further production using the same approach is undeniable. Maybe A Midsummer Night’s Dream, Romeo and Juliet or Macbeth? Only time will tell!

The EU project Vconect was initiated in December 2011 with the objective of providing high quality video communications experiences within communities such as social networks. The challenge was to enrich this experience by developing technological components that would enable networks such as social networks with a specific focus on the dynamic requirements of group conversations. In detail these requirements comprised excellent audio and video quality, low latency, and optimized network and media processing resources. Fraunhofer was one of the nine Vconect partners, with the Institute’s main contribution to the project being the Audio Communication Engine, a complete solution for high quality communication applications, and low delay audio codec AAC-ELD. 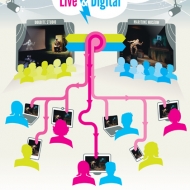 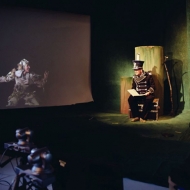 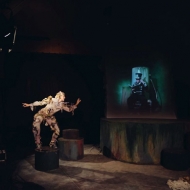