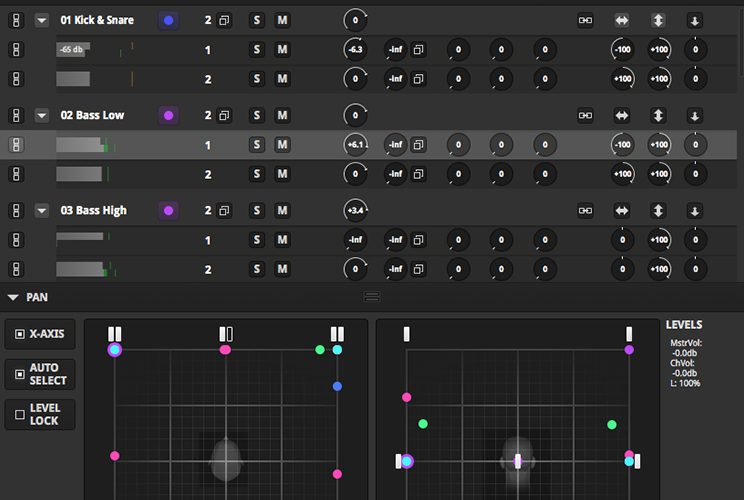 Together with Hamburg-based company New Audio Technology, the Fraunhofer IIS developed a way to integrate MPEG-H Audio into the Spatial Audio Designer (SAD) to easily create, edit, monitor, and export MPEG-H masters. The software tools allow the production of immersive and interactive audio to be integrated into familiar workflows. The plug-in can be used in all common digital audio workstations (DAW) and, based on an easy-to-use panning tool, enables the creation of immersive audio even beyond the actual limitations of the audio workstation. This allows MPEG-H masters to be produced in virtually any production environment, from stereo to surround to immersive formats such as 7.1+4H or 22.2. The native integration of MPEG-H in the SAD makes it easy to combine 3D panning with the creation, monitoring, and export of MPEG-H audio. Three MPEG-H modes enable the targeted production of MPEG-H audio in the desired target format, whether for broadcasting or object-based music applications.

“I have been working with technologies in the field of 3D audio for well over ten years. For good sound, you need the right tools, which – of course – need to be practical and easy to use,” explains Tom Ammermann, Managing Director of New Audio Technology. The IIS also places great importance on tailoring the MPEG-H tools and technologies to the requirements of users, making them as market-ready as possible. From this shared interest, a cooperation was born that has now been running for almost seven years.

A new feature in the SAD is an MPEG-H software encoder, which, for the first time, enables the export of coded MPEG-H bit streams, for example in an .mp4 container, directly from a DAW, as well as the export of MPEG-H master files. The Spatial Audio Designer now covers the entire production chain, from the microphone signal to mixing, authoring, monitoring, export, and encoding, right down to the process of combining the creation with the video into one file.

Alongside the SAD plug-in, the hardware-based Spatial Audio Designer – Processor (SAD-P) by New Audio Technology was equipped with MPEG-H. This transfers the MPEG-H functionality from the SAD plug-in to the real-time environment, thus enabling its live application, making it especially well-suited to use in broadcast environments.

“With the new Spatial Audio Designer, you can now deliver an MPEG-H production solution for all use cases and sectors. From a simple stereo advert, for which you only need the metadata, to complex broadcasting or film content with interactivity and different presets, all the way to object-based immersive music. And not just in post-production — live too,” Yannik Grewe, Senior Engineer at Fraunhofer IIS, explains.

Producers can now create an end-to-end workflow in MPEG-H at their workstation and deliver the result to their customers, and thus to consumers, without the need for additional tools or steps. This makes object-based audio production even easier and more straightforward, opening the doors for it to become more widely adopted.