At this year’s IBC in Amsterdam, IP delivery played a critical role at the DVB booth. These days it is possible to deliver DVB services over IP systems and get IP packets over DVB systems. Compared to ordinary broadcasting via cable, satellite or terrestrial, the packet based delivery over the Internet is forced to handle unexpected network constraints that can lead to packet loss. This can cause anger and frustration among viewers, for example if an important goal is missed during a sports broadcast. To guarantee continuous service without sudden interruption, DVB relies on DASH (Dynamic Adaptive Streaming over HTTP) and HE-AAC, the preeminent audio codec to support a wide spectrum of bitrates.

Digital video broadcasting is a technology that has been around for decades with DVB-S (Satellite), DVB-C (Cable) and DVB-T (Terrestrial) standards having been ratified in the 90s. Between 2005 and 2010 the second generation (DVB-S2, DVB-C2, DVB-T2) of these transmission technologies were standardized. The first generation technologies packed and transmitted data within an MPEG transport stream (MPEG-TS). While the second generation of DVB standards supports “multi-modal” transmission, meaning that one can select between MPEG-TS and the new IP based delivery.

Transport of IP packets on the physical layer of DVB were standardized in 2007 through DVB GSE (Generic Stream Encapsulation) which was expanded in 2013 to a “Lite” version with reduced consumption of memory and processing power.

Compared to ordinary DVB transmissions, the channel capacity of IP based delivery can vary heavily. To avoid dropouts of the content, DVB-DASH was standardized (https://www.dvb.org/resources/public/standards/a168_dvb-dash.pdf) in 2014 for the transport of DVB based services over IP based networks. DVB-DASH is a subset of MPEG-DASH and was optimized for the specific needs of DVB.

DASH allows for continuous service even under harsh network conditions. The bitrate of the audiovisual content is adapted dynamically to the available data rate. The smallest bitrate for an AV signal is around 500 kbit/s where 64-96 kbit/s are allocated to the audio portion. The DVB standard recommends the usage of HE-AAC because the audio codec offers excellent audio quality at low bitrates. Additionally HE-AAC allows seamless switching of bitrates without any noticeable distortions for the user.

Another future advancement with DVB is the integration of HbbTV in DVB-S and DVB-T. HbbTV stands for Hybrid Broadcast Broadband TV and allows for interactive television with additional services such as polls, news tickers, games, program previews including pictures, media libraries with different stations and much more. Based on DVB-DASH specifications, HbbTV 2.0 supports adaptive streaming over HTTP and denotes HE-AAC as the mandatory audio codec. Thanks to the delivery of high audio quality at low bitrates and the support of metadata for improved audio playback, HE-AAC is the premier solution for stereo and surround content.

With the decision for DASH and HE-AAC, DVB and HbbTV are following in the footsteps of well-known video streaming portals such as Hulu, VUDU, or Google’s Play Music which already rely on HE-AAC to distribute movies over the Internet.

At the DVB booth of this year’s IBC, Fraunhofer IIS together with Work Microwave demonstrated how DVB content can be delivered over a satellite connection, combining DVB-DASH (DVB over IP) and IP based DVB-S2 (IP over DVB) in one transmission chain. 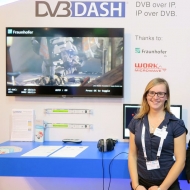