In a worldwide industry first for a TV broadcast station, the German public broadcaster ZDF will use MPEG-H Audio and Cingo for a TV production. The upcoming episode “Wolfskinder” from the highly successful documentary series “Terra X” will be produced in 3D sound together with 4K and 360 degree video for virtual reality applications. Fraunhofer IIS will be responsible for providing next generation audio technologies Cingo and MPEG-H, in addition to supporting 3D sound recordings on set.

But the sound is not the only new highlight consumers will experience. The documentary will also be the first Terra X episode to be produced in ultra high definition 4K video. In addition a 360 degree version for VR applications will be published. Together with 3D sound a completely new media experience is created for the audiences. The documentary will be available for download in 4K, 360 degree video, and 3D sound from May to September 2016 on www.terra-x.zdf.de.

A sound engineer from Fraunhofer IIS will travel with the ZDF film crew to India to support the production of 3D sound. The sound will be mixed for 3D audio reproduction, i.e. the recordings will be mapped on a loudspeaker setup in where the listener will be completely immersed by sound. In addition to the regular surround sound, additional height speakers play back sounds from above the listener to create a new feeling of captivation. For example, if a bird can be seen on top of a tree, the user will also hear it from above at the same time. The immersive sound catapults the audience into the middle of the action.

For storage and transmission of 3D sound MPEG-H Audio will be used. This new audio codec is one of the new audio standards for next generation TV and streaming systems. MPEG-H enables the transmission of immersive 3D and interactive sound. The latter enables listeners to adjust the sound mix to their liking, e.g. with a choice between different commentaries of live sporting events.

In addition, ZDF uses the Fraunhofer technology Cingo for the VR version of the documentary. Cingo brings audio immersion to VR devices and applications with a stunning level of realism that creates the experience of “being there”. Cingo renders 3D audio content over headphones by incorporating head movements, which allows listeners to perceive sound sources from anywhere in the 3D space around them.

The use of MPEG-H Audio and Cingo by ZDF once again demonstrate the stations commitment towards new technologies in the realm of TV and new media.

For more information about MPEG-H Audio and Cingo, please browse www.mpeghaa.com and www.fraunhofer-cingo.com. 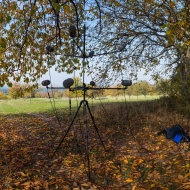