PARIS (France) and ERLANGEN (Germany), August 25, 2015 – Technicolor (Euronext Paris: TCH; OTCQX: TCLRY) and Fraunhofer IIS, today announce the formation of a licensing program as part of the market introduction of the next-generation TV audio system developed by the MPEG-H Audio Alliance. The MPEG-H Audio Alliance TV System is under consideration for the ATSC 3.0 standard.

The licensing program on the two companys’ standard essential patents for the MPEG-H Audio Alliance TV system will be administrated by Technicolor (through its subsidiary Thomson Licensing, SAS). The program will build upon the enormous success of Technicolor’s MP3 licensing program, and the company’s experience managing approximately 1,100 licensing agreements across 15 licensing programs focused on consumer electronics.

The MPEG-H Audio Alliance TV System enables TV broadcasters to capture and deliver next-generation audio and allows consumers to customize content experiences. The system is equally capable of delivering interactive live sports experiences as well as the immersive sound of feature films to the home.

“The MPEG-H Audio Alliance TV System is based on a comparatively small but still powerful subset of the MPEG-H 3D Audio standard. We believe the formation of this new program is poised to make the next generation of TV audio a reality,” said Manuele Wahl, Head of Technology and Trademark Licensing, Technicolor.

“For the past 15 years MPEG-H’s predecessor MPEG AAC represented the state of the art in audio coding. And today it is integrated into all iOS and Android-based smart phones and available in all major operating systems and internet browsers. It is providing the TV sound for over half of the world’s population,” said Bernhard Grill, Head of the Audio & Multimedia division and Deputy Director, Fraunhofer IIS. “We are sure that MPEG-H will continue this success story with its new cutting edge capabilities and take state of the art to the next level.”

Based on contributions by Technicolor and Fraunhofer IIS to the MPEG-H Audio Alliance, the licensing program will focus on a per-unit royalty, with annual volume discounts for manufactures of both professional and consumer hardware and software. No patent royalty will apply to content as such, and therefore no royalty will accrue for producing, transmitting, or distributing content under this licensing program. The pricing structure has been developed to enable a fast and cost-efficient implementation of ATSC 3.0.

The MPEG-H Audio Alliance TV System for ATSC 3.0 is endorsed by major broadcasting and consumer electronics companies who want to accelerate deployment and deliver the best customer experience at a lower cost.

“The TV broadcast companies who work together in the Pearl TV partnership fully support MPEG-H as the best next-generation audio technology for future mobile and home TV devices. We believe a single codec is the best solution,” said Anne Schelle, Managing Director of Pearl TV, which represents more than 200 local stations throughout the U.S.”

“From a consumer electronics point of view, the MPEG-H Audio System will accelerate the deployment of ATSC 3.0,” said John Godfrey, Senior Vice President, Public Policy at Samsung Electronics America. “Within the Korean ecosystem, where ATSC 3.0 may be implemented even sooner than in the United States, leading broadcasters and manufacturers believe that MPEG-H is the perfect solution for a single audio codec.” 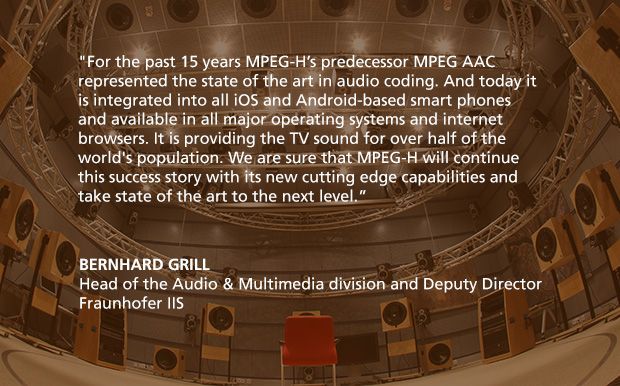