Digital Radio Mondiale (DRM) is the open, efficient, green digital broadcasting standard available for all frequencies and for all coverage needs: international, national, regional and local. From April 5 to 7, 2016 the first DRM European Workshop in conjunction with the DRM General Assembly was held at the Fraunhofer Institute for Integrated Circuit IIS in Erlangen.

On the first day, the General Assembly started off with a review of the DRM Year 2015/2016 by Ruxandra Obreja, the chairwoman of the DRM Consortium. After various reports of the DRM committees, projects and departments, the day closed with the General Assembly elections. All steering board members and senior posts were re-elected including Ruxandra Obreja (BBC World Service Group) as DRM Consortium Chairman as well as Matthias Stoll (Ampegon AG) and  Alexander Zink (Fraunhofer IIS) both as Vice Chairmen. Alexander Zink was also re-elected as Treasurer for the DRM Consortium.

The evening was spent in Nuremberg with a guided tour through the historic rock-cut cellars and a Gala Dinner at the “Hausbrauerei Altstadthof” – a traditional craft brewery and tavern.

On April 6, the General Assembly continued with a guest speaker note and company and industry updates, e.g. from NXP, Panasonic, Ampegon, Avion/Communications Inc. and Fraunhofer IIS. Around noon, the part of the General Assembly only accessible to members of the DRM Consortium closed with an outlook into DRM´s future projects and strategies. It then opened up for external participants to become the first DRM European Workshop. Focus of that event – co-hosted by the German DRM Platform – was the common experience of the state of digitization of terrestrial radio in the various European countries and national initiatives for the launch of DRM as a complementing solution to the existing DAB(+) networks already established in various European countries, promising to cover all the use-case scenarios and requirements of European broadcasters that the DAB specification was not originally designed for. The afternoon workshop session included an international update on DRM developments and roll-out. The first workshop day was wrapped up by a guided tour to the digital cinema, the digital sound studio, the Audio & Multimedia demo frame and the bit eXpress campus radio of Fraunhofer IIS. Afterwards all participants joined a Mediterranean tapas dinner and networking reception at the Institute.

On the second workshop day, April 7, 2016, the benefits and opportunities of DRM in the AM bands below 30 MHz (DRM30) and in the VHF bands including the FM band (DRM+) were shown along with possible solutions DRM can provide to give a digital perspective to all radio broadcasters by complementing the existing DAB(+) networks. A special focus was placed on the necessary impetus to the radio receiver and car industry for the provision of multi-standard radios in the European market, supporting the DRM standard along with DAB+, FM and AM. Finally, a European DRM network was established to help with the exchange of information across all interested parties. After fruitful discussions and sessions, the first DRM European Workshop closed with a networking lunch. 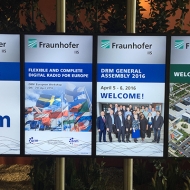 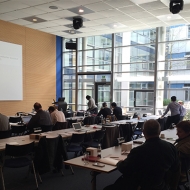 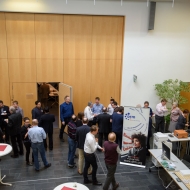 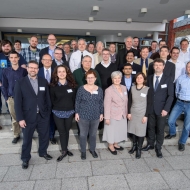 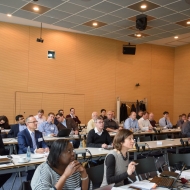 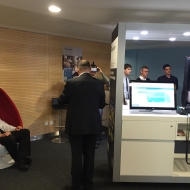